The Quebec Winter Carnival Canoe Race is a not to be missed event. This is the sport of all sports. Where athletic men and women canoe there way through the practically frozen St Laurence river to the delight of cold, red cheek spectators watching. This competition is something you would not imagine was even possible. 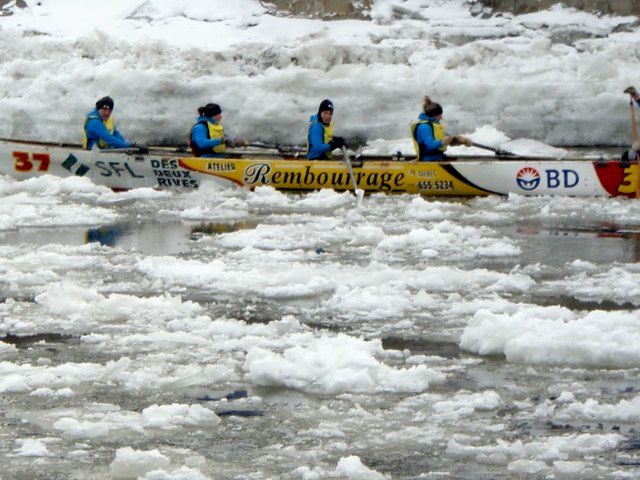 This is how it works. Each canoe has 5 teammates, the leader in the front. There are three race categories. Classe Élite Homme, the Competitors Men Division; Classe Élite Féminine, the Womens Division; and, Classe Sport, the Participants Division. The first to go are the Competitors Men who are in the professionals stage of the sport and vigorous in their pursuit of a win. The second to go are the Women, who are just as tough as the men and impressive to watch their determination. Third are the Participants, these guys evidently woke up one day and decide they wanted to canoe the frozen river. They are definitely dare devil type madmen with a lot of enthusiasm. And in my opinion the most fun to watch! The race consist of crossing the river, touching the buoy and then returning. The Competitors must do this twice.
When the race starts the Competitors paddle the canoes strategically through the icy water trying to get ahead of each other, sometimes getting stuck in clusters slowing them down. The river is frigid cold, icy in some areas and frozen in other areas. The teams paddle some of the way, and must also get out of their canoes to push and carry them when they approach the frozen areas. It is really impressive to watch the connection between the river and the teams as they navigate nature in such usual circumstances. 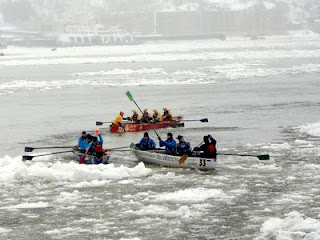 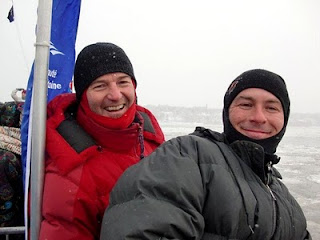 While the Competitors raced, I was able to speak to Alain St-Onge a Participant racing in the 3rd round with Team Assurances et services financiers des Amériques, canoe #33. I asked him what compelled him to do this? He answered, "I really just wanted to try it, it was just something to do." I then asked him what his family thought of his endeavour? He said, "My wife has not talked to me since, but my sons are very proud!" Meanwhile, I noticed his teammate had a hole in his wet suit, oblivious to the frigid cold temperatures. These are some tough guys! 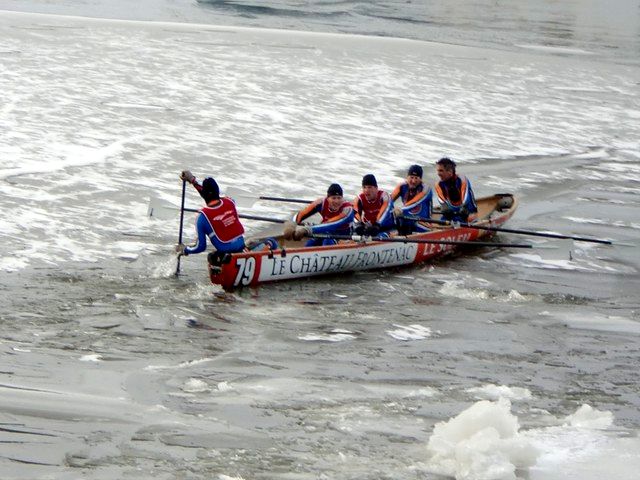 The race finished with Team Le Château Frontenac as the winners, which has become standard for over a decade now. I had the pleasure of dining with Eric Fraser from team Le Château Frontenac whom had injured himself a few weeks earlier and was unable to participate in this years race. He seemed very passionate about his sport and eager to talk about it. He explained how historically this was how the mail was distributed in Quebec and how very dangerous the river can be. He says the sport requires much preparation, dedication and endurance. He described his teammates as having different temperaments and coming from very different professional careers, his being an industrial engineer of medical devices. Eric explained that their different backgrounds and personalities bring a different element to the team, which helps make it stronger; which furthermore, allows them to be incredibly in sync with each other when in their canoe on the river. It was apparent that Eric has a profound respect for his team and his sport. He represented himself and his team as true winners.
Congratulations to Team Le Château Frontenac Canoe #79!
Posted by NYC Sidewalker at 3:59 PM