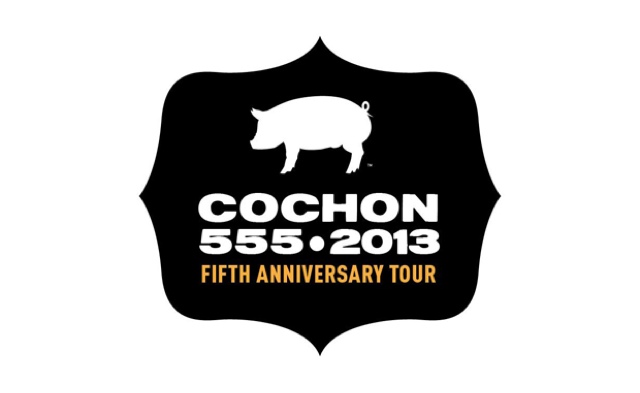 5 Chefs, 5 Pigs, 5 Winemakers for 5 Porky Years! The Fifth Anniversary Tour kicked off in New York City on February 10th, which also happens to be my birthday! Coincidence? I think NOT. This traveling pork circus goes to nine cities. One of which is Miami on Sunday April 21, where pork lovers will gather at the Four Seasons (fancy huh?) and enjoy all the piggy hoopla. All in preparation for the Grand Cochon (that's like, head pig in charge) in Aspen. So get your tickets because a little swine will do you fine. http://www.cochon555.com/  Follow these pigs on Twitter @Cochon555
· New York City on February 10
· Atlanta on February 17
· Vail on March 10
· Seattle on March 17
· Boston on March 24
· Washington, DC on April 7
· San Francisco on April 14
· Miami on April 21
· Chicago on April 28
· Los Angeles on May 5
Who will be the lucky pig? Cochon 555 Miami competitors: Aaron Brooks (Four Season Miami), Timon Balloo (Sugarcane), Jeffrey McInnis (Yardbird), David Thomas (The Bazaar) and Cesar Zapata (The Federal). May the lard be on your side.

Posted by NYC Sidewalker at 12:43 PM No comments: